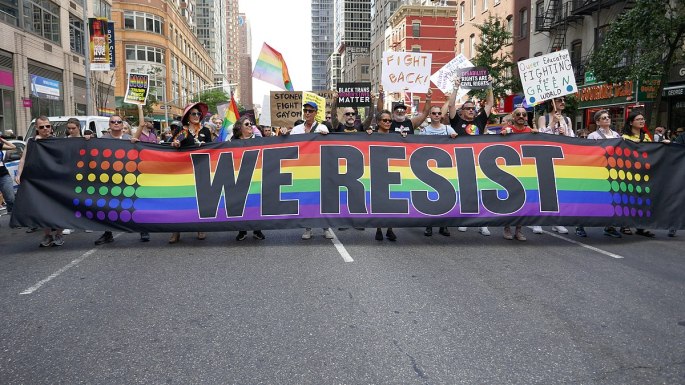 The road ahead of us is long, and the road behind us is even longer.

I’m writing this with the assumption that Joe Biden will actually make it into office – that an undemocratic power grab won’t take place and that we aren’t about to descend into an apocalyptic hellscape. I’m writing this with an awful lot of hope, but also an awful lot of expectations. I’ve seen so many people who align with the left, often with joyful tears streaming, talking about how “we’ve won.” I won’t delve into my pessimistic ideas about what’s actually going to happen between now and January; even considering the best, most democratic, most normal power transfer we can achieve – y’all, we have not won. Don’t get me wrong, I will be thrilled to watch a despotic maniac leave office. But this fight – the fight – is not over.

Kamala Harris has a deep and well-recorded history of disenfranchising marginalized communities when she has had power. Joe Biden is a pedophile whose political resume is rife with bad choices and cronyism. We must kick ourselves out of the “lesser evil” mentality – garden-variety systemic racism and old-normal police brutality cannot be acceptable conditions. That acceptance got us to this point in the first place. Who holds office next year will not erase the normalization of fascism as an ideology; will not level the economic playing field for hundreds of thousands of Americans living paycheck to paycheck or dying without food or shelter; will not resurrect the trans folks being murdered daily or protect the ones who yet haven’t been. I think that this concept that this was the victory, that this election was the battleground, is endemic to white cis middle-class liberalism. This fight did not begin with you or me, with Biden or Trump. And it will not end when we have decided we are satisfied. It ends when real equality is achieved.

Do not go back to brunch, do not return to your bubble of cat videos and mobile games, do not descend back into complacency. I know it’s exhausting to have had the diseases festering in American capitalist culture laid bare and not be able to cover them back up. But people are counting on you, on all of us; there is so much more work to be done. Be grateful we can do it in a marginally safer space under a new president, spread that joy and positivity far and wide – but do not forget.

“Look at a stone cutter hammering away at his rock, perhaps a hundred times without as much as a crack showing in it. Yet at the hundred-and-first blow it will split in two, and I know it was not the last blow that did it, but all that had gone before.” -Jacob Riis